Last month we celebrated the musical talents in Argyll and Bute at the  Corran Halls in Oban. As part of this Andrew and Robin of Miller•Crossan have written a blog for us sharing their experiences of the festival. 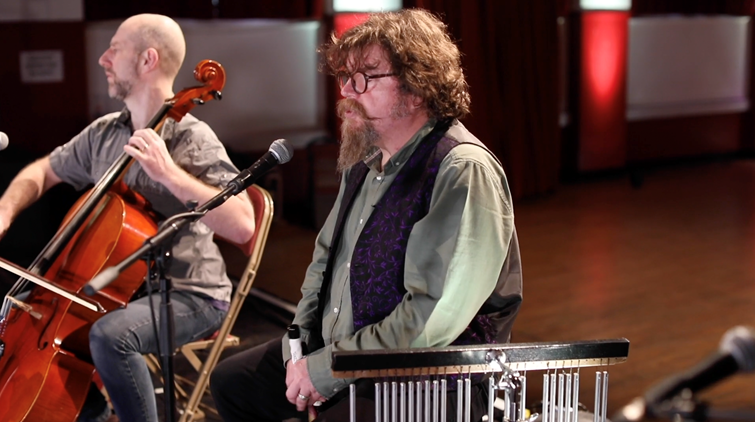 We approached the TIDES festival as a challenge, and as a learning process in developing our music. Although we have been playing our blend of roots and blues-based material for a number of years, our live-sets to date have consisted of re-imagined covers of blues, traditional and rock songs rather than originals. During the pandemic we worked on an album’s worth of original songs, and sticking to the mantra of ‘write what you know’, we wrote about the West Coast. I am from Islay and have spent nearly all of my life living in Argyll close to the sea. Andy Crossan, has lived in Dunoon for many years and also spent much time on Lismore where his parents and relatives lived. Our song arrangements are still blues and folk based but there are no levees or mojos in the lyrics which is probably more appropriate for those accustomed to ferries and glens! The song titles of the material we played at TIDES titles reflect this: ‘From Sanaig Bay to Eriskay’, ‘West Coast Music’ and ‘Some of this Can Drift’.

Our TIDES performance/filming took place in Oban’s Corran Halls and it felt appropriate to be playing our brand of ‘West Coast Music’ in Oban which has felt like the centre or the gateway to the West for most of our lives.

Live performance has been limited in the last few years as indeed have in-person rehearsals. Although we knew the original songs and the musical ideas that we wanted to share at TIDES, it still felt exciting to try and get them together and stage-ready with just a few weeks before the show. And these weeks became broken up by periods of in-band covid-isolation and other such unwelcome distractions. Time was as limited as the tides are unlimited.

For our album of original songs we want to involve other musicians and TIDES provided an ideal opportunity to work with others. Kevin McGinty has played bass with us for a few years but he is also a very good cellist – escaping from the pub performances of recent years onto the Corran Halls concert-stage seemed like the ideal time to bring in Kevin and allow him to play the new songs using the cello without fear of random pint-spillage damage!

We also were able to involve a younger singer, Shona Wright, who lives on Lismore. She had less distance to travel to Oban than we did from Dunoon too!

We had played with Shona on Lismore a few years ago at a mid-summer open air birthday party and we’re keen to play with her again at some point. When we heard that Shona had sung ‘Wrong Side of the Moon’ on the Lismore-focussed album ‘Songs from the Great Garden’ we were really impressed with her voice which seems much more lived in her 22 years would suggest. As there were still many restrictions in place,  we rehearsed the harmonies for ‘From Sanaig Bay to Eriskay’ by listening to rehearsal recordings we sent her by email. The only in-person rehearsal with all four members of our Corran Halls line-up was immediately before we played!

We felt our songs really benefitted from Kevin’s cello and Shona’s vocals and plan to make the most of their contributions when we begin recording soon. We also hope to involve other younger Argyll musicians and singers too – we know fiddlers and Gaelic singers will certainly lift the recordings.

The TIDES festival was very good for us – a learning experience, a way to dust of the musical cobwebs of the last couple of years - a way of trying out our new original music with other musicians, and a way of connecting and re-connecting with some of the other performers. In terms of the set-up at the Halls, the production team from TIDES were amazing to work with and really made everything very straightforward – we really only had to worry about getting the music right and adjust to performing to an empty hall!

Hopefully the digital audience enjoyed our music too.