CHARTS supported Kirsten in gaining meaningful real-life work experience, something she has previously struggled to gain although she was a postgraduate professional artist, with volunteering experience in art and community organisations.

CHARTS Communications Coordinator James Coutts has supported Kirsten in her professional development over the last year and helped her to get her Diploma in Digital Marketing at SCQF level 6. As a consequence of CHARTS' support and Kirsten's experience and desire to learn more about CHARTS and partnership organisations, she has additionally been supported by  CHARTS to help as project staff on other programmes beyond her apprenticeship, such as creating the Heritage Horizons Films. This has helped to develop and build Kirsten's CV allowing her to secure her future success.

CHARTS support has not only allowed Kirsten to gain a recognised qualification but allowed her freedom to experiment with different aspects of the job and find out what areas she enjoyed the most. This has helped to grow Kirsten's networks and confidence and towards the end of her Modern Apprenticeship has been invited by CHARTS to continue to support the development of youth participation and looks forward to working with the organisation and partners in the future as a Youth Ambassador attached to the CHARTS Board. This has given Kirsten security and further opportunities to grow and engage with CHARTS. CHARTS has also supported Kirsten in an artist capacity by helping to build her networks with heritage and cultural organisations in Argyll and Bute. CHARTS board was also able to help support Kirsten in applying for Creative Scotland funding by revving her proposal and writing a letter of support for her project on Bonawe, which will explore the industrial heritage of Argyll and Bute.

‘Being part of CHARTS has allowed me the opportunity to apply my creative thinking to working in the third sector and find out what direction I want to take my career in. Working with CHARTS has only confirmed my interest in Arts and Heritage I hope to continue working with communities in Argyll and Bute well into the future. I often tell people that the Modern Apprenticeship offered by CHARTS has been the most important and helpful qualification I have gained!’ Kirsten Millar

‘This modern apprenticeship has allowed me to kick start my career and I feel a sea of opportunities have opened up for me moving on from here. I would highly recommend to any young person to apply for these opportunities and for any organisation to take up a Modern Apprentice.’ Kirsten Millar 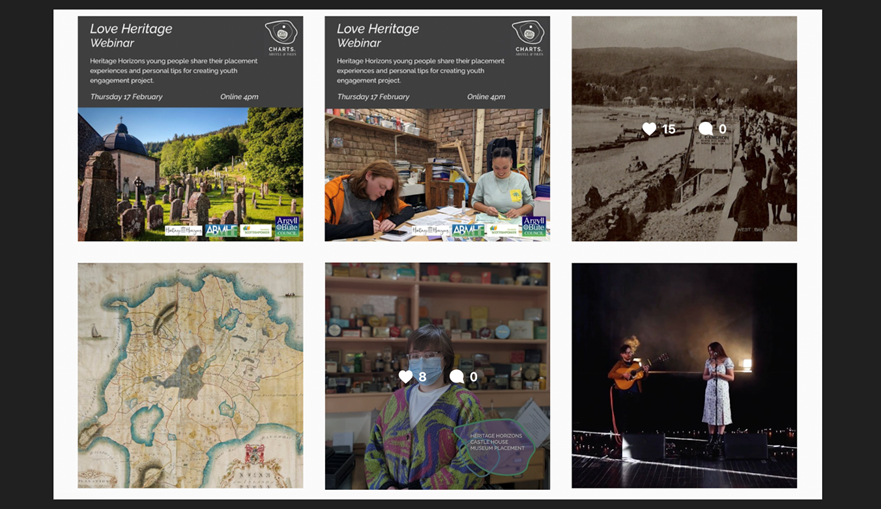