CHARTS has supported Eve Campbell in the creation of two new projects through VACMA and EVOLVE Arts and Tourism. As a young designer Eve faces additional challenges such as establishing a career as an emerging artist. With CHARTS' support Eve was able to free up time to focus on her practice and financial support her to create a new body of work. Funding support from CHARTS has opened up new opportunities for Eve such as allowing her to grow her network by connecting with other local creatives and showing in galleries and local shops in Tighnabruaich.  This allowed Eve opportunities to sell her work managing to make her practice sustainable.

‘I am continuously thinking of new projects, products and ideas however as I financially rely on my work to make a living. Quite often these exciting ideas get overlooked due to the pressures to produce work for selling. However, research and experimentation play a crucial role in the development of my designs and keeps my work fresh and unique. The support from CHARTS has enabled me to do this, allowing me to work on some of the projects I have been looking forward to working on for a while.’ Eve Campbell.

Eve was able to create a new body of work Fragments with CHARTS’ EVOLVE project. This enabled Eve to grow her networks and collaborate with other creatives, the Drey Workshop. Fragments encouraged tourists to interact and explore Argyll’s landscape in different ways, by allowing them to find highly decorated earthenware fragments, made by Karen McPhail, stored in the landscape.

CHARTS has supported Eve in the creation of a project legacy through the development of textile wall hangings that represented the fragments placed in the environment. Eve’s work was sold in local galleries and shops, allowing Eve to support the local tourism economy. EVOLVE opened up Eve’s work to new audiences such as tours and also supported her in digitally engaging people by supporting the creation of a process video that captured the attention of thousands online.

CHARTS has also helped to make Eve’s practice sustainable through long-term support as a CHARTS member. With VACMA Eve will continue to grow her practice and develop previous works, specifically On the Brink inspired by the Scottish tundra, organisms and boundaries between shore and land and plant life

‘As a young maker in Argyll, CHARTS has provided me with the support to continue experimenting and developing new work. It is vital that I continuously free my time for the projects and research periods that bring life to my work and CHARTS has enabled opportunities for me to do this.’ Eve Campbell 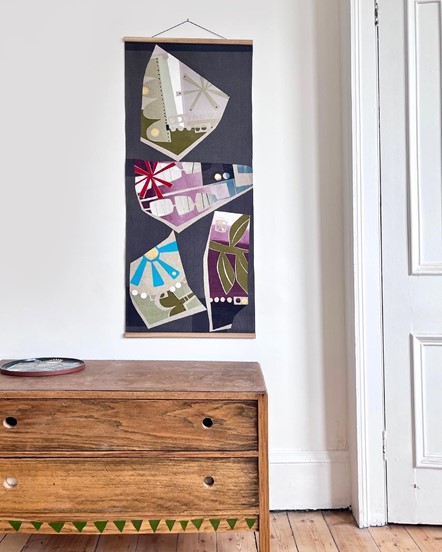